‘Guacho’ has an extensive network of supply and services 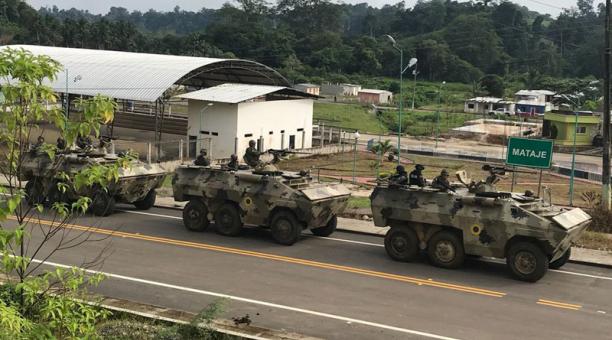 The laboratory was in the middle of the mountains of Nariño, in Colombia. The extensive vegetation surrounded the entire complex where cocaine was processed and packaged.

A narrow stone path was the only access. Its operation was in charge of about 20 members of the armed group Óliver Sinisterra. After its dismantling, carried out last Sunday in Tumaco, the investigations have determined that for the operation of this laboratory there was an extensive network of collaborators.

This conclusion was reached because there were food, clothing, rubber boots, gas cylinders, plastic containers, household utensils, etc. But how do these inputs reach the Colombian jungle?

This newspaper spoke with the military of Colombia, who say that the narco-criminal group has supply networks throughout Nariño. The food, for example, is obtained in commercial stores in Tumaco (Colombia) and San Lorenzo, in Ecuadorian territory. This task is delegated to dozens of settlers, who “make the market” in small stores located on the border of the two countries.

There the food is collected, along with shipments of medicines, liquors, boots and gas cylinders. The data of the military coincide with the version of a boatman who collaborated with the guerrilla of the FARC.

In his story, which since last June appears in the Ecuadorian Prosecutor’s Office, it is indicated that the head of dissidents, alias ‘Guacho’, uses small businesses not only to stock up on food, but also to store weapons, bulletproof vests, radios and other equipment.

According to the ex-militiaman, the stores are in the Colombian sectors of Palo Seco, Puerto Rico, La Playa and Vallenato, points where the armed group has interference. The ex-armed points out that for the transfer of inputs, fluvial routes are used, such as the Mataje River, near the Pacific, and that its entrance is through the town called El Chontal.

“It is difficult to establish people to take food to these sectors, as they pay anyone to move the market and delivered to a specific site.” All the logistics are financed by narcos living in Guayacana and Llorente, two sectors of Tumaco.

One of them is alias ‘Don Omar’, who has a boat in which the supplies for the camps that are close to the laboratories and clandestine kitchens are moved. In the last operations, the armies of Colombia and Ecuador have seized computers.

In the expenses it is even detailed the salaries that the collaborators perceive. For example, women who cook are paid 150,000 pesos, in dollars it would be about USD 52 at the current rate. It is not detailed if these payments are daily.

These ‘salaries’ are superior for the dissidents who help coordinate the operations of the armed group. In the ex-military version it is said that ‘Guacho’ pays up to 3 million pesos (USD 1 000) to dissidents who help him look for new ones territories.

The heads of each squad earn twice as much. The payments are punctual and every two or three months they have permits to go to their native towns. The ex-militiaman, in his version, said that the Ecuadorian Police supplied the group of dissidents with weapons. These statements were rejected yesterday.

In a statement, the entity said that “categorically discards that there is a structure within the police, dedicated to illegal activities.” The organization maintains that organized crime seeks to affect trust in the police institution in this case. And he said that he makes available “his entire organization” to identify any responsible person who was linked in these acts. (I)