Guacho is surrounded by multiple ‘experts’ 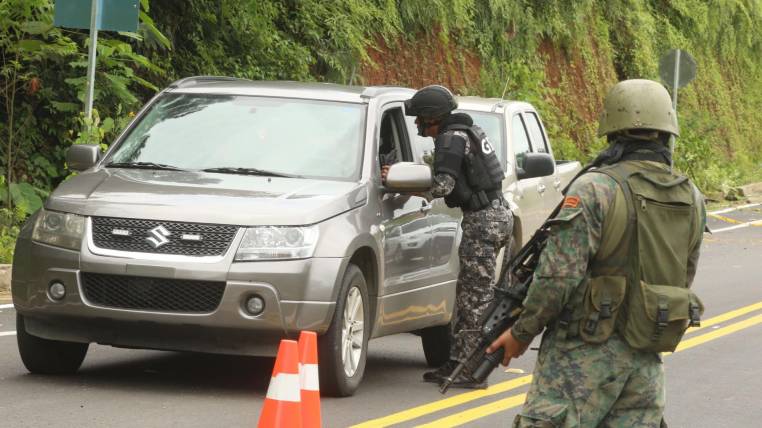 They appear as explosives, assassins, financiers, custodians of weapons and ammunition experts. But they are described as day laborers, masons, farmers, peasants, ice cream sellers, housewives and there is even someone who came to Ecuador asking for refuge.

These are the 28 people accused of organized crime and terrorism who will go to a trial hearing on August 17 due to the explosion of the San Lorenzo police station, Esmeraldas, on January 27.

Walter Arizala Vernaza, alias Guacho, leader of the narcoterrorist front Oliver Sinisterra, is at the head of the criminal organization that is awarded at least 10 attacks in the San Lorenzo area.

His origin and nationality (Colombian or Ecuadorian) had been questioned in the days of the kidnapping and subsequent murder of Javier Ortega, Paul Rivas and Efraín Segarrra occurred between March and April.

The Prosecutor’s Office verified that Guacho is Ecuadorian from Limones, San Lorenzo. The references were mentioned during the investigation but before the closing of the instruction, in body 28, the certification sent by the Civil Registry was attached.

In the tax file there are hundreds of certificates attached by the lawyers of the suspects, most of them arrested, to prove their honor. These are citizens and representatives of organizations that claim to know them and attach their copies of the certificate to support their claim.

One of the defendants said he was a refugee. To verify this, the Office of the Prosecutor requested information from the Directorate of International Protection of the Ministry of Foreign Affairs. That unit sent two responses.

On May 29, he informs that the person from whom the information is required “on April 25, 2009, requests international protection and with the same date was recognized by the Ecuadorian State as a refugee.” The case was under review and on January 30, the refuge was revoked. The same agency, on July 9, informs the Office of the Prosecutor that the requested person does not appear in the database.

In contrast, the Prosecutor’s Office also has dozens of telephone interceptions, transcripts of dialogues, and captures of messages exchanged by the suspects.

There are plans, provisions, references to actions outside the law, mentions of arms purchases, and murder of people. These evidences will be presented at the trial preparatory hearing.

On Monday, the trial hearing for terrorism will be held in Quinindé, Esmeraldas.

The Prosecutor’s Office investigated the attack on an electricity transmission tower assigned to collaborators of the narcoterrorist front Oliver Sinisterra.

Its leader, Walter Arizala, alias Guacho, is one of the defendants. He has a prison order and a red broadcast order at Interpol. Guacho is one of the most wanted men in Ecuador and Colombia.

On April 13, 14 people were arrested in Mataje, San Lorenzo, Esmeraldas. There was a police and military operation in which ammunition was seized. The suspects were prosecuted for arms and ammunition trafficking. One of them was called to trial last month and awaits an audience.

The Office of the Prosecutor opened a preliminary investigation to determine the circumstances in which the kidnapping of Óscar Villacís and Katty Velasco took place. The first summoned are César Navas, former Minister of the Interior, and Patricio Zambrano, former secretary of the Defense portfolio for this Monday. (I)

The climate will advance mango harvest

Board dismissed the Superintendent of Companies