Guacho was going to take the barracks of San Lorenzo 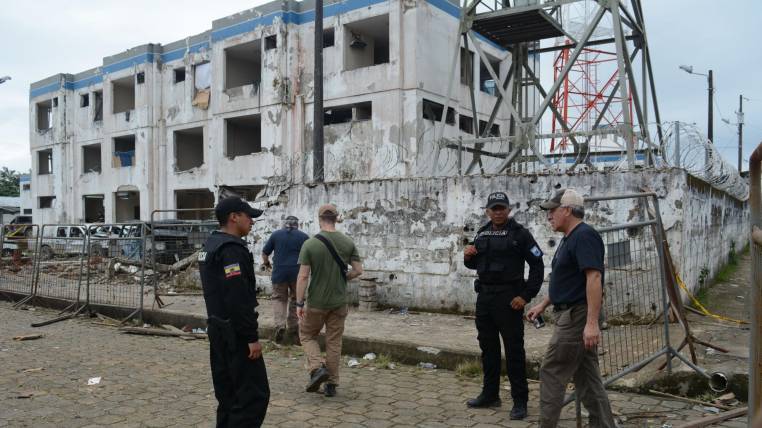 The tanks with explosives that destroyed the police station of San Lorenzo, on January 27, were transported from Puerto Rico, in Colombia to Mataje in San Lorenzo, Esmeraldas.

The cargo was delivered to alias Sombra who, along with El Viejo, El Flaco y Guadaña, placed the cargo outside the barracks. The order of the attack was given by alias Amarillo, arrested and linked to the criminal investigation for organized crime and terrorism investigated by prosecutor Wilson Toainga, after the attack on the police unit.

The story is part of the version that on May 16 rendered Stiven Perea, a Colombian of 21 years, arrested in the neighboring country in April, as part of the Wálter Arízala band, alias Guacho, front leader Oliver Sinisterra.

Puerto Rico is a town in the department of Nariño, in southern Colombia. In that town that borders Mataje, Óscar Villacís and Katty Valencia were kidnapped. In Mataje was seen for the last time the team of newspaper El Comercio, kidnapped and killed by the group of Guacho.

In his testimony given at the Embassy of Ecuador in Bogotá, Perea describes how the Guacho network operates, whom he met six years ago in Mataje.

In Amarillo (Geovanny Pérez), known in Santo Domingo de los Tsáchilas as a prosperous businessman selling ice cream, he says he was “the one in charge of harassment, of explosives, of finances, like the collection of taxes for those who have a house in the Playón “.

To him all the preparation of the explosion is attributed. “Before the attack on the San Lorenzo barracks, Guacho was going to take the barracks,” he says.

And complements: “That’s why when the attack took place they made a party”. He explains that the action was motivated because a few days before Cuco was captured, who had guns belonging to the Candelilla militia and because Ecuador put more military and police presence on the border.

That, according to the version, aroused the anger of Guacho, who felt cornered. Cuco was in charge of the leadership of the militias of the lower area of the Mira River, of weapons and drugs.

Remember that 15 days before his capture three people came to Puerto Rico to sell and repair pots. It was said that they were people of the Government of Ecuador. “Guacho gave the order to capture them and kill both of them and they were going to return them to Ecuador, and the other was left to exchange with Cuco,” he says.

At that time Cachi was in Mataje in a family reunion and arranged to release everyone. On February 20, it was planned to kidnap some engineers who were building the Mataje highway.

From harassment (shooting) to the military and helicopters were also occupied. Guacho is described as Oliver Sinisterra’s “Chief of Chiefs”. Putting that name to the group was his idea. Part of the success comes from the support of the population. “The civilian people of Mataje love Guacho. It gives him logistical support, the supply of provisions, Guacho gets in large businesses both in San Lorenzo and in Colombia, “he reports.

He described the activities of at least 23 collaborators. Juan Carlos is the assassin of Guacho, he is the spoiled dog. Kléver and Chilma charge the tax in Puerto Rico. James Cuajiboy, Robinson Cortez, are part of the security ring. Wainer Valencia is the commander of the militias. Jairo Ruiz is the boatman who is dedicated to the transport of Coca. The weapons were kept on the Ecuadorian side in the house of Cuco and Guacho. The coves were in Mataje, the kitchens (laboratory) in Campanita. Sully Quiñónez cooked for the people of Guacho.

The group also gave security to the submarine arrested with drugs in Campanita.

The network is well organized

Explosivists, security, logistics. They are part of the tasks performed by more than 20 close collaborators of Guacho, says a member of the network, arrested in Colombia. In Mataje, Cuco organized the boys..

The young people of Mataje are almost all in the service of Guacho, says the Ecuadorian detained in Colombia. They were in charge of patrolling, watching how the military and police move. A half dozen people help Guacho by keeping his things: weapons, ammunition and explosives. (I)

Church of Ecuador is committed to taking preventive measures against abuse