The eggs of 800 tortoises, a species classified as vulnerable, hatched between August and October in the Pacoche Marine Coastal Wildlife Refuge, in the Ecuadorian province of Manabí, a unique spectacle that guarantees the survival of the species. 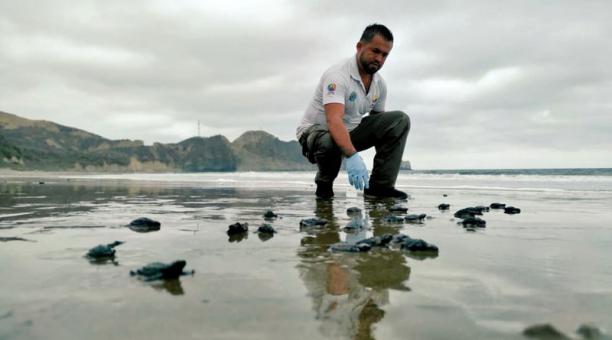 This was reported on Thursday, November 21, 2019 by the Ministry of Environment of Ecuador in a statement that specifies that hatching occurred in the canton of Manta, where the route to the sea of ​​the last 34 neonates of that species have been observed in La Botada beach.

The Manabí Provincial Director of the Environment, Belén Brito, indicated that “during the hatching period, which lasts between 45 to 60 days, specialists from the State portfolio and park rangers executed technical protocols such as nest delimitation and monitoring of nesting areas ”.

The objective was to guarantee the protection of specimens, of which 185 green turtle and golf turtle nests have been recorded to date, on different beaches in the coastal province.

These activities, which include training processes with local communities and tourists, are part of the sea turtle conservation project promoted by the Ecuadorian Government throughout the coast of the country.

The nests that hatched are present since June on the beaches of San Lorenzo, Liguiqui, Santa Marianita, El Murciélago and La Botada.

On Wednesday, November 20, the Galapagos National Park reported that about twenty native turtles from the Ecuadorian archipelago managed to leave the incubator after a captive breeding process, within the framework of a joint project with the Galapagos Conservancy organization.

These are twenty offspring of the Chelonoidis hoodensis and Chelonoidis niger species, which came out of their eggs in the incubators of the Fausto Llerena Breeding Center, of the Directorate of the Galapagos National Park.

This fact marks the beginning of the hatching period within the breeding and breeding program in captivity of land turtles in the aforementioned breeding center.

The nesting period began last July, with the collection of the first eggs, which began to hatch after remaining 120 days in the incubators.