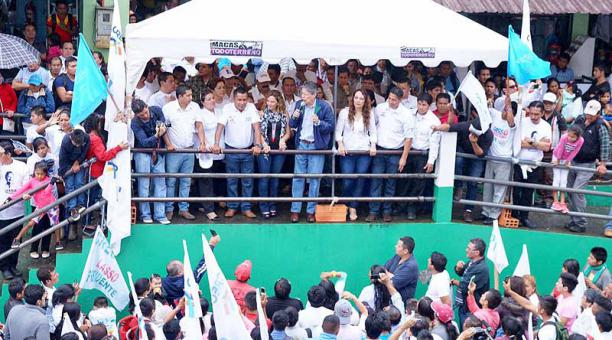 The candidate for CREO-SUMA, Guillermo Lasso, was in the capital of Morona Santiago, where he offered that, if winning the elections, he would promote the creation of tourism zones in the Amazon.
The candidate participated in a caravan through the commercial area of the city. He was accompanied by his wife, Maria de Lourdes Alcívar. His activities extended for an hour, despite the light drizzle.
Lasso then headed a political rally in the Central Market, located in the Amazonas street. There, he reiterated his main proposal to create one million jobs.
“Many citizens want to recover their businesses; many young people want to study what they want and not what the government decides. We will promote free trade zones because the Ecuadorian Amazon is a privileged place in the world,” he said.

Lasso also offered a prior consultation on the mining issue. During the last months, shuar and military groups have had struggles in this province. The protests point to the mining operations of the Chinese company EXSA.

Correa´s party in a tight spot for corruption