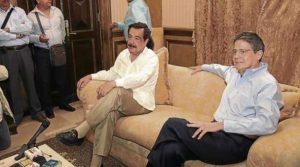 The opposition comes together to support the candidacy of Lasso in the second round under the slogan of defending democracy and freedom.

The presidential hopeful of the Creo party, Guillermo Lasso, started the second round of elections with a key political ally, Jaime Nebot, leader of the Social Christian Party (PSC), who gave him his support.

The Mayor of Guayaquil will reinforce the social mobilization during the campaign. He already called for a march on March 8 in Guayaquil, with the main guilds, social leaders, and bases of Social-Christian party.

In addition, he is the one who has responded, as an antagonist, to President Rafael Correa, who also called for a march on the same day.

With that political front led by Nebot, Lasso will have more time to concentrate on his political campaign in the provinces. Yesterday he visited Cuenca, in Azuay, where the president of Creo achieved an alliance with the local group Podemos. And, although in that province he did not obtain the majority of presidential votes, his party got two seats in the Assembly, which is the half of seats in that province.

Lasso had promised to personally to thank the people of Cuenca, who responded to the vigil call, outside the headquarters of the local National Electoral Council.

Even before the first round, PSC presidential hopeful Cynthia Viteri had held a critical debate with Lasso. However, once the results have been known; Especially for the formation of the National Assembly, both political forces trimmed smoothed things over.

“No personal or party interests are at stake but the value of democracy and freedom,” Nebot said yesterday.

Even other forces, such as the indigenous sector and the center-left, that initially took distance from Creo, are now open to supporting a single candidacy.

That will also be reflected in the establishment of alliances in the Legislature to promote a common opposition agenda.