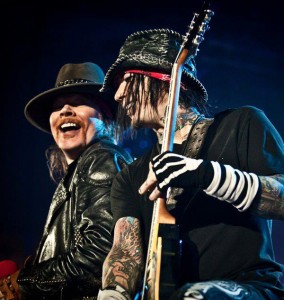 The leader of Guns N ‘Roses, Axl Rose, affirmed that the group just finished a new album to be released during this year.

“We have recorded many themes from Chinese Democracy. We have been working more on some of these topics and have also composed new songs. But basically, the result is a sort of second part of Chinese, “said the singer for Revolver Magazine.

In addition, the band is working on a new album of Chinese remix songs.

Currently, the band is in a residency at the Hard Rock Casino in Las Vegas, where they will stay until July.