Ecuador reached bronze in the women’s 4 × 200 meter post at the World Relay World Cup that was played this Sunday, May 2, in the city of Chorzow, in Poland. His record was 1.36.86 (national record) and he came behind Poland and Ireland. 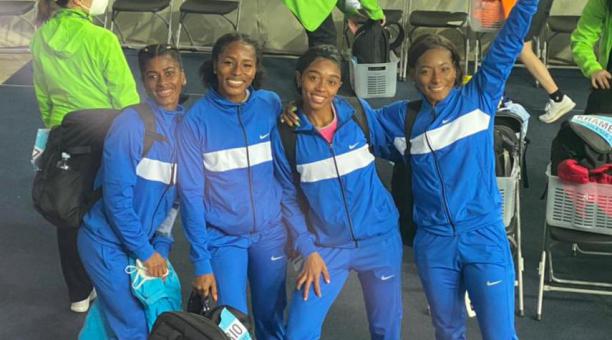 10 minutes after the end of the 4 × 100 meter final, the athletes returned to the starting area for the 4 × 200 meter final. Ángela Tenorio started the relay, Virginia Villalba continued , the third shift went to M arizol Landázuri and Anahí Suárez finished, who wasted power and speed to defend third place and the bronze medal.

Tenorio, Landázuri and Suárez had run the final of the short post and returned to the track to achieve this historic result. Ecuador participates, for the second time, in this distance in the World Relay World Cup. Two years ago, in Japan it ranked sixth. The men’s 4 × 200 post finished fourth place

Ecuador also placed fifth in the final of the 4 × 100-meter post at the World Relay World Cup.  His record was 44.43 seconds. The race was won by the Italian team.

The national team did not repeat the post with which it qualified for the final. Angela Tenorio began the relay, who handed over the witness to Anahí Suárez. The third reliever was Yuliana Angulo who replaced Virginia Villalba and a speedy Marizol Landázuri finished the game.

Until the second turn, Ecuador was in second place. The transition between the third and fourth relay was slow and the national team lost seconds. Marizol Landázuri tried to discount, but crossed in fifth place behind Italy (43.49 seconds), Poland (44.10), the Netherlands (44.10) and Japan (44.40).

The national team, by qualifying for the final of this World Relay World Cup, achieved a place in the Olympic Games and also in the Absolute World Athletics World Cup, next year in Oregon , United States. The two classifications to the top world athletics tournaments are unprecedented for national athletics.

It also achieved a new national brand with a record of 43.86. The previous mark was 44.14 which was set at the World Relay World Cup held in the Bahamas in 2017.

Ecuador has participated in the World Relay World Cup since 2015. On that occasion, the national team ranked ninth. In 2017 he ranked seventh, winning Final B with a ‘fotofinish’ final. On that occasion , Angela Tenorio ran the last relay and on the same finish line she stripped the Bahamas of the first. In 2019, the team was eliminated in the first round.