This May 2, 2021, it was learned that the Prosecutor’s Office opened a prior investigation for the alleged crime of embezzlement against the mayor of Guayaquil, Cynthia Viteri and four other people. 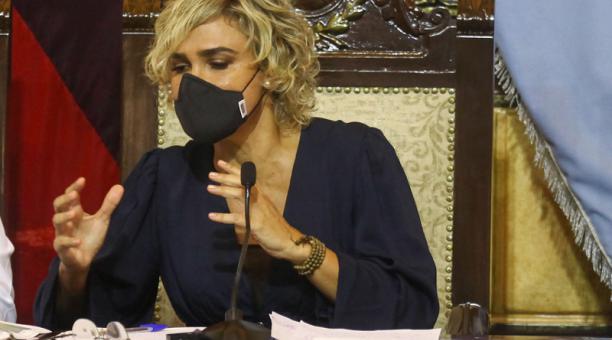 The Guayas prosecutor, Yanina Villagómez , was the one who ordered the opening of this investigation.

The Comprehensive Penal Code (art. 278) punishes the crime of embezzlement with a prison term of 10 to 13 years.

In a fiscal document, Villagómez calls to render his version to the mayor of Puerto Principal and the rest of the investigated. Everyone must be accompanied by their lawyers .

The procedure is called at 09:00 in the office of the Guayas Provincial Prosecutor’s Office, La Merced building , 13th floor.

This research is related to a contract executed by the Municipality of Guayaquil for the Letras Vivas project.

The initiative consisted in the hiring of the “design, production and technical, conceptual and logistical coordination service for the painting of 50 walls in the public thoroughfare with phrases from Guayaquil literature.

According to the first investigations, this project had a cost of USD 389,350 plus VAT and the Cabildo would not have provided remuneration to the authors of the phrases used.

This May 2, 2021, the Municipality of Guayaquil indicated that it was the Mayor who requested the Prosecutor’s Office to initiate an investigation into “the municipal actions related” to the Letras Vivas project. He said that tomorrow, Monday, there will be a statement on the opening of the investigation.

In addition, the prosecutor Villagómez asked Viteri to send certified copies of the pre-contractual and contractual process.

You have 10 days to submit that documentation.

Another project, which is investigated in this case, corresponds to the elaboration of six oil paintings to be exhibited on October 9, for the commemoration of the bicentennial of the declaration of independence of that city. This had a cost of USD 445,000.

The Government will be able to vaccinate 100,000 people per day