Richard Carapaz continues to add milestones in his career in world cycling. The Carchense rider from Team Ineos finished second on stage 16 of the Tour de France , this September 15, 2020. The mountain event was held between La Tour du Pin and Villard de Lans, a total of 164 kilometers. He also won the award for combativeness of the day. 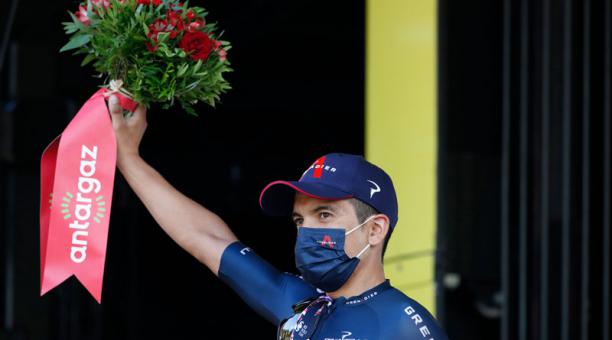 The Ecuadorian thus achieves his first podium in the most important cycling competition in the world, where he is an absolute rookie.

Over the weekend, after the poor result of the Ineos riders on stage 15, where team leader  Egan Bernal lost his chances of retaining the Tour crown, achieved last year, the team’s decisions changed.

The gregarious Carapaz and Andrey Amador had the freedom of not having to work for Bernal and embarking on the adventure of leading the stage. Amador lacked the strength at the finish of the competition, while the Ecuadorian persisted in his idea of ​​being the protagonist and dropped from the peloton to chase the German Kamna, from the Bora team , who showed power and concentration during the tough stage.

The last kilometers of the competition found only four runners escaped from the rest of the peloton. Behind Carapaz appeared the Swiss Sebastien Reichenbach and the French Warren Barguil.

Combative and insistent, Carapaz achieved his best position in France and is now getting ready for the queen mountain stage, which will take place on the day of September 16, 2020. “I dare to think that stage 17, tomorrow’s, is even better for Richard for reaching over 2400 meters. Knowing that he is courageous , that he wants to vindicate himself, because of the falls, because of the pressure of being gregarious, for so many things, it is likely that tomorrow he will also try ”, said Joffre Revelo, cycling coach.

With its sensational performance, the ‘Locomotora del Carchi’ climbed to box 14 in the general classification . The Slovenian Primoz Roglic , from the Jumbo-Visma team, remains the leader of the competition.