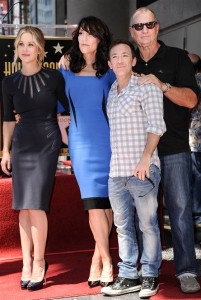 The cast of the popular television series of the 90s “Married …. with children,” met on Tuesday, after 17 years, to accompany actress Katey Sagal, who received her star on the Walk of fame in Hollywood.

Ed O’Neill (Al), Christina Applegate (Kelly) and David Faustino (Bud) accompanied Katey Sagal (Peggy) for recognition. The series, which remained in the air for 11 seasons, was never nominated for an Emmy, probably due to the black humor with which it portrayed the typical American family.

Sony prepares new series based on “Married with Children”