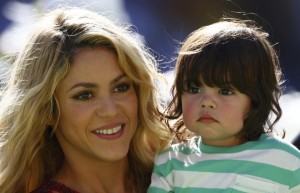 The Colombian singer Shakira is expecting her second child, from her relationship with Spanish soccer player Gerard Pique. The parents of the singer, William Mebarak and Nidia Ripoll, revealed the sex of the baby, “another little boy”, “We are very happy,” to Spanish media during their visit to the city of Barcelona.