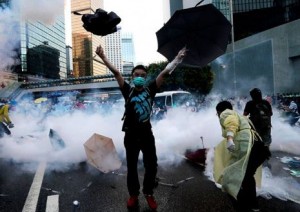 Students who lead the pro-democracy protests and the governments of Beijing and Hong Kong have hardened their positions this Thursday and demanded the resignation of the local executive chief, Leung Chun-Ying.

The promoters of the pro-democracy protests have threatened to increase acts of civil disobedience and occupy government buildings if this midnight (local time) Chun-Ying has not resigned.

Half an hour prior to the end of the term, Leung reiterated to reporters that he will not renounce to the charge, however, he designated Carrie Lam, the second in command of the local government, to dialogue with student leaders immediately, as reports Reuters.

Police have warned it does not rule out the use of force if the protesters intensify their campaign of mobilization. The protesters urged families with children to leave the area of concentrations.

“We emphasize that the police will not tolerate any illegal blockade of government buildings,” warned a spokesman for the Hong Kong police,  the Superintendent Hui Chun-Tak.