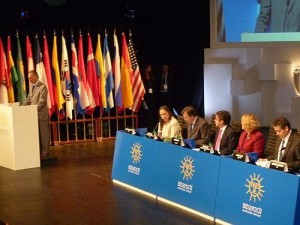 Since the middle class has taken a stunning leap, it is a challenge to give way to social an economic mobility

Luis Alberto Moreno, president of the Inter-American Development Bank (IDB), said in Washington after an event in which the economic and social prospects of Latin America were analyzed, that this region is going to change to an “enormous speed” in the following twelve years .

According to figures from the IDB, Latin America will grow by 3.7% annually, and the GDP (Gross Domestic Product) of the region will double from $ 7 billion in 2012 to $ 14 billion in 2025, representing a challenge to give way to social mobility, since the middle class has taken a stunning leap.

Argentina, Chile, Mexico and Uruguay will have exceeded their annual per capita income at $ 23,000, which indicates that a nation belongs to the group of developed countries. Colombia and Peru will later enter the same group.