IESS will lack liquidity this year to pay pensions, according to report 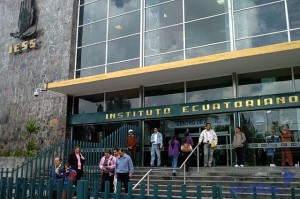 According to the report IESS-DSP-2015-001 of the Directorate of Pensions System of  January 20, the Ecuadorian Institute of Social Security (IESS) will have a deficit of USD 339.1 million this year to cover pensions and other benefits of 432 780 retirees, which could require the entity to resort to its savings.

The document states that “incomes (contributions from members) no longer cover the needs for the 2015 pension payments, presenting a deficit.”

Despite this, the President of the Board of IESS, Victor Hugo Villacrés, rules out an budget deficit because, according to him, a part of the revenues of the Pension Funds is distributed to pay pensions, the other part is saved.

If necessary, in a specific month part of the savings could be taken to cover a shortfall, which according to him, does not mean that the entity has a deficit.”

Bonil defended yesterday his cartoon before the SuperCom