If Iran returns it will be a competitor for Ecuador 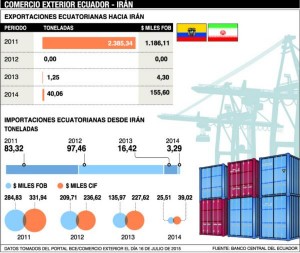 In six months the sanctions that prohibited financial transactions and oil trade with Iran, as a penalty for the development of a nuclear program that concerned the United States, Europe and the West in general, will be lifted.

The return of Iran, the fourth with largest oil reserves, seems to indicate an even greater fall in oil prices, according to the International Monetary Fund.

With the agreement among the US, Russia, China, France, Britain and Germany, oil producers return enlist their revenues account.

Ecuador, despite not being a direct costumers competitor, will be affected by this drop. The domestic crude oil is mainly sold to the US, while the geographical logic, by proximity, suggests that Iran prefers Asia (China, India and Japan in particular), according to Ricardo Gallegos, oil consultant.

Ecuador negotiated a trade agreement and exported $ 1.2 million to Tehran, according to figures from the Central Bank of Ecuador.

Ecuador has $ 4,563 million in international reserves