IMF: The country’s economy will decrease by 4.5% this year 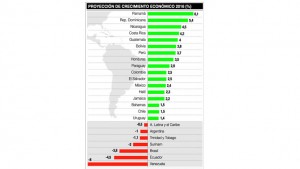 According to its World Economic Outlook report, out of the furnace since yesterday, our country will fall to an unprecedented negative rate since the 1999 crisis, of -4.5%: the worst ratio in the region, except for Venezuela, which will fall in a deep well of -8%.

Ivan Rivadeneyra, director of the Center for Economic Research (CIEC for its Spanish acronym) of the Espol, indicates that it was very clear that a forecast of this nature would occur.

“I would not underestimate the IMF forecasts because the country has been stepping on a recessive process.” The three quarters of change in the trend of the economy and the new tax package that is expected only serve to flatten the ground. The dollarization is added to this (the dollar appreciated and exports have fallen), “the uncertainty and the high cost of living. The economy will suffer.”

But while the IMF premonitions are relatively devastating, the Central Bank of Ecuador (BCE) remains optimistic, although this optimism is close to zero. The BCE again revises the growth forecast of gross domestic product (GDP) for 2016, which would be similar to 0.3% recorded in 2015. Late last year they talked about 1% and then, in February, it was downgraded at between 0.3 and 0.4%.

The ISSFA limits credit delivery to its affiliates