In Guayaquil there was a rally against labor reforms 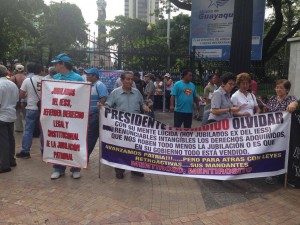 Guayaquil workers and trade unionists held this afternoon a rally in the Centenario Park against government labor policies.

Juan Vareles, vice president of the CEDOCUT (Ecuadorian Confederation of Class Organizations), announced this afternoon that an unconstitutional lawsuit against recent labor reforms approved by the government majority in the National Assembly will be presented.

The protest was accomplished peacefully and was guarded by agents of the National Police. Likewise, a section of the Lorenzo de Garaicoa street was closed. (I)