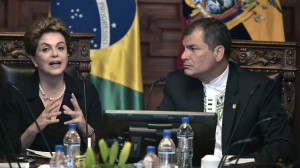 Trade issues, financing and the Manta-Manaos axis were, among others, the issues discussed Tuesday by Presidents Rafael Correa of Ecuador; and Dilma Rousseff of Brazil, in the Carondelet Palace.

Rousseff met with Correa from 18:00 in a short state visit, prior to their participation Wednesday in the Fourth Summit of the Community of Latin American and Caribbean States (CELAC).

After the meeting of the two leaders, a joint statement was released. It was reported that difficulties experienced by Ecuadorian non-oil exports (bananas, shrimp and tuna) were analyzed. Correa said that the first two products had phytosanitary problems, he considered were “easily overcome.” On fisheries, he added that these exports experience rather paperwork issues.

For her part, Rousseff said that there will be a meeting in March to “solve” the inconveniences.

The Ecuadorian president also said that the Manta- Mano axis should be promoted in a better way.