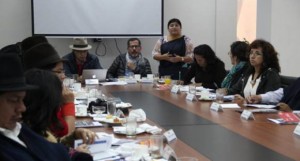 The construction of a “programmatic agenda that allows to consolidate the conquests of the villages and nationalities of Ecuador” and the conformation of a Coordination Commission were the issues discussed during the second meeting of the Indigenous Alliance for Citizen Revolution. This group brings together the National Federation of Peasants, Indigenous and Black Organizations (Fenocin for its Spanish acronym), base communities of the Sierra Center and other groups.

Franklin Columba, a member of the commission, said that between January and February they will collect the concerns of the people, which will be analyzed in a National Assembly, whose date shall be defined in the workshop.