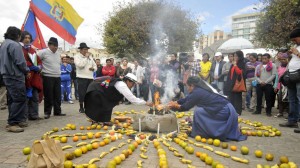 Yesterday, Indigenous marched demanding to the Interior Ministry the release of Brazilian professor and journalist Manuela Picq, arrested during protests on Thursday in the historic center of Quito.

Monday Picq will face a hearing in which her deportation from the country will be defined after her visa was revoked on Friday by a a branch of the Chancery.

The marchers went to the so-called Carrion house, located in the Carrion and Versailles streets, a detention center for foreigners in irregular situations, and they were welcomed by the detainees with shouts like: Freedom! We are foreigners, not criminals!

Manuela Picq is the partner of the leader of the indigenous organization Ecuarunari, Carlos Perez Guartambel, who managed to enter and verify her state and get her signature to file a protective action and another of habeas corpus in her favor.

The Indian leader went to the flagrancy unit of the Pichincha prosecution to file briefs, but the judges present at that time refused to receive his order.