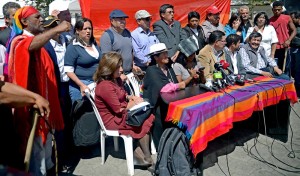 This afternoon a popular assembly will be held in El Arbolito park, where since last week remain the indigenous opponents of the regime.

ECUARUNARI president Carlos Perez Guartambel explained that this meeting aims to establish “the lines of a true legislation and oversight.”

He added that this is also a response to the institutionalization of bodies such as the Ombudsman and the Council for Citizen Participation, which although were born as a proposal of the organizations, in the opinion of Perez have been distorted. (I)