The indigenous leadership of Ecuador valued this Friday the recent ruling of the Constitutional Court that recognizes the right of indigenous peoples to decide on their territory as a step in the fight against climate change. 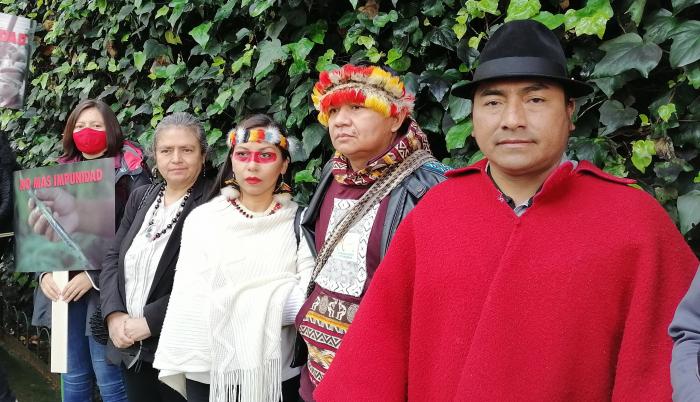 The leader of de la Conaie, Leonidas Iza (right), criticized that the State has not guaranteed the rights of the native peoples. Here at a recent protest against the oil spill in the Amazon.

This was expressed in a virtual appearance by national leaders and leaders of the Amazon region, a week after the high court ruled in favor of the Cofán nationality, in what is known as the Sinangoe Case , ratifying that its members were not consulted on dozens of mining concessions. on their ancestral lands and that they should be redressed for it.

A leader of the Sinangoe community, Wider Guaramag, explained that the ruling of the Constitutional Court against the mining concessions on the banks of the Aguarico River, in the Amazonian province of Sucumbíos, is part of the fight against the climate crisis.

“Our grandparents have left a territory free of contamination, that we have inherited and that is what we want to pass on to future generations,” he assured at the digital press conference from the Ecuadorian Amazon.

For his part, the president of the Confederation of Indigenous Nationalities of Ecuador (Conaie), Leonidas Iza , censured that the State has not guaranteed the rights of native peoples.

“(The authorities) have made giving education and health a condition in exchange for devastating the territories. And when they have had that, they have never guaranteed the rights of the communities,” added the leader.

The president of the Confederation of Indigenous Nationalities of the Ecuadorian Amazon (Confeniae), Marlon Vargas, also praised the sentence on the Sinangoe case as an emblem of protection of that jungle region against climate change.

“At the (last climate summit) COP26, the concerned governments of the world reached an agreement to continue protecting the territories of nationalities because they are the hope of humanity,” he said.

The Ministry of the Environment, Water and Ecological Transition of Ecuador organized on Thursday a virtual meeting with academics and officials who are experts in actions to mitigate climate change in which they warned of an increase of about 2.7 degrees Celsius in the country’s average temperature. term, between 2040 and 2070.

The Constitutional Court ratified the previous week the decisions of previous instances as well as the provision of comprehensive reparation in the areas affected by the mining concessions near the community of Sinangoe.

In this way, according to a document from the judicial body provided to Efe, the State must guarantee in a ” non- delegable ” manner an adequate prior, free and informed consultation with the communities where any type of extractivist project is to be developed.

Thus, he also explained that “under no circumstances, the consent of the execution of the plan or project, by the community, should be understood as an open letter for the State to carry out exploitation activities “.

In the virtual appearance, the indigenous leaders took the opportunity to demand that the authorities take action in a case of illegal mining that affects communities in the Amazonian province of Napo, the reason for which they marched on Wednesday in the city of Tena.