Spain delivered this Thursday the first temporary visas to four Ecuadorian day laborers, two men and two women, who will work in the harvest of the red fruit in the Andalusian province of Huelva (south) within a current circular migration plan between the two countries. 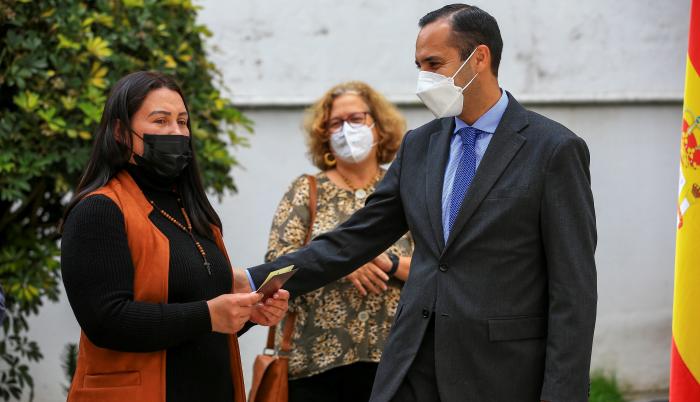 The Minister of Foreign Affairs and Human Mobility, Juan Carlos Holguín (r), hands over the passport to Mónica Pérez (l)

“This symbolic delivery (of visas) wants to reveal a call for legal emigration and, on the other hand, the mutual trust between the two governments, which want to improve the living conditions of their peoples,” the Spanish ambassador to Ecuador, Elena, explained to Efe. Madrazo, who participated in the documentation delivery event at the Consulate General of Spain in Quito.

The diplomatic representative stressed that under the agreement signed last year between the two countries, mechanisms were established that make “it possible for people to go, but invoking legality, they return.”

According to this formula, Madrazo added, those Ecuadorian farmers who return at the end of their work in Spain will have priority in the case of wanting to return to work in that country and will increase the number of the 250 that are part of the first batch of day laborers, until doubled.

The head of Foreign Relations and Human Mobility, Juan Carlos Holguín, praised the implementation of the program and considered it “extremely important” for his country to “have a public policy of circular migration”.

“We believe that this responsible and circular migration is reflected through the agreement signed last year with Spain,” he told Efe before emphasizing that this human mobility policy seeks to counteract risky migration.

One of the beneficiaries to receive the temporary visa to travel to Spain was Elsa Aldaz, 42, who has spent years harvesting strawberries in the town of Ambato, in the Ecuadorian Andes Mountain range.

“It’s the first time I’ve left my house, I have three children and it’s a bit hard to leave them, but I’m just making the effort for them,” he said.

Pedro Andrés Alta, a 28-year-old from the Andean province of Imbabura, who will also leave Ecuador for the first time, will travel with her to the Andalusian region.

For this reason, he said he felt “excited and grateful for the opportunity that has been presented to us as farmers of a lifetime to learn, bring knowledge to the country and for them to see the capacity that Ecuadorians have.”

It is expected that a total of 250 Ecuadorian day laborers will participate this year in the red fruit collection program in Huelva, for a period of half a year and after the commitment made to return to their country, all within the framework of this pilot experience that it is extended in equal terms to day laborers in Honduras.

Lasso: “We do not plan to take more financing from China or any other international organization”