Indigenous performed “Crusade for the Dignity, the Justice and clean hands” 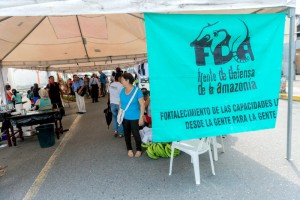 Indigenous and peasants who consider themselves affected by the oil contamination left by Chevron met yesterday in the central park of Lago Agrio (Sucumbios), to participate in a “crusade for dignity, justice and clean hands.”

Since 09:00, residents of Sucumbios, Orellana and other provinces of Ecuador participated in what was called the ‘Second Fair for Dignity and Justice.’

During the meeting not only the damage left by the oil was shown, but agricultural products and handicrafts were also sold, in order to allocate the 70% of the profits to the struggle of the Union of People Affected by Texaco-Chevron and te 30% for associations that make up the frontline.

With this money, said Pablo Fajardo, Common Counsel for 30,000 Amazon Ecuadorians affected, they would have the resources to move forward in their fight against the transnational.

“We will continue our actions until Chevron pays the last penny of the conviction. We will not rest until real justice is achieved, they will never end with the thirst for justice of those affected by their operations,” said Fajardo.