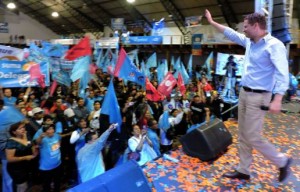 “2017 is just around the corner and the SUMA movement will continue growing and will achieve the application of its ideals throughout Ecuador.” With those words, Mauricio Rodas, Mayor of Quito and president of that political group, asked his followers, during the National Convention on Saturday, February 21, to strive to continue with the tasks the political organization requires.

Despite the fact that supporters interrupted the speech of Rodas shouting “Rodas president, Rodas president,” the mayor, meanwhile, onlymentioned that his “responsibility is not just with the city but rather with all Ecuador.”

During the convention it was ratified to the National Board that it continues being chaired by Mauricio Rodas. His vice president is William Celi.

In addition, SUMA and VIVE (the latter group chaired by Antonio Ricaurte) confirmed their partnership in Pichincha, with a view to the elections of 2017.