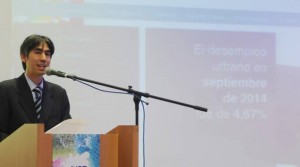 According to José Rosero, head of INEC, this research allows to highlight the contribution of unpaid work, particularly of the domestic in the national economy. “Historically this work has been invisible”, he said.

Unpaid work represented the 15.41% of the Gross Domestic Product (GDP) in 2010. This was announced yesterdayby the director of the National Institute of Statistics and Census (INEC), José Rosero, during the presentation of the satellite account of unpaid work in Ecuadorian households, between 2007 and 2010.

To reach this conclusion, the INEC did a calculation and was based in the time unpaid activities take, by the average compensation that would be received for doing these activities.

The operation showed that the population of the country developing unpaid work does not use 11 000 million hours a year to do this, and women are the ones who do most activities.

The study, revealed that if families across the country had hired domestic and care services in 2010, it would have cost about US $ 10 700 million, being this value, which represented 15.41% of GDP in the year. Of that percentage, women contributed with a 12.01% and men 3.40%.

In 2007 unpaid work did not represent 10.92% of GDP, but by 2010 it rose to 15.4%. According to INEC, the unpaid work is followed by trade, construction, oil extraction, public administration, professional activities, etc.