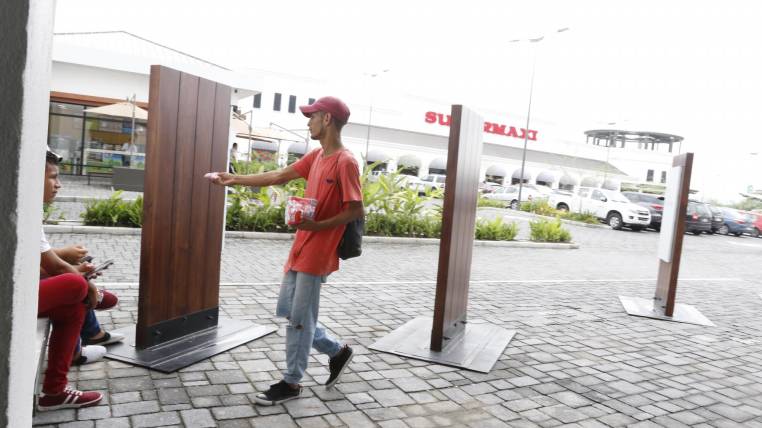 In the malls of Guayaquil and La Puntilla there have been several robberies and theft. Experts attribute the cases to carelessness and lack of investment and control.

Seventeen seconds That is the time it takes for three subjects to approach a white vehicle parked in the parking lot of a shopping center in La Puntilla, to remove some accessories from the car and escape without anyone around to notice the situation.

The fact, which went viral on social networks last Tuesday, was raised days before at 3:25 pm and was captured by the security cameras of the place. However, there is still no news about the arrest of those responsible.

This case is added to two other robberies of accessories to vehicles that have been registered during this month in another shopping center in Los Ceibos and another complaint that refers to a theft inside a new mall on Samborondón Avenue.

Major Angel Gonzalez, head of the Los Ceibos district, confirms that these crimes occurred in his sector. However, he assures that with the help of the security cameras, those responsible were caught.

The agent explains that the problem is that these malls are freely accessible, so it is difficult to reserve the right of admission or arrest a person for any suspicion. “We know they are not gangs, but individual people who eventually try to evade private security.” However, he mentions that at any sign of an attempted robbery, guards have a responsibility to call the police.

These events, mainly discussed on Twitter, have forced the population to ask themselves if the city’s commercial centers offer sufficient guarantees for their customers. There are those who think so. And others, such as Juan Carlos Ocaña, resident of the North Kennedy citadel, who consider that not only do they need more integral security equipment in the establishments, but more police presence in the surroundings.

“In December they took me the two mirrors of the car in a parking lot in a mall in the Alborada”. The loss was $ 600. The administration never took responsibility, regrets.

A Geancarlos Zurita, another user from the north who was taken out of the trunk of the emergency tire in November, is concerned that certain places, such as the Riocentro and Plaza Batán in La Puntilla, do not deliver registration tickets when entering the parking lots. “In Riocentro until recently they did it, they put the license plate on the car and they checked it at the exit. I’m not saying it’s the best, but at least it made you feel more secure. ” Now, adds Iván Yépez, a frequent visitor of these spaces, “the cars are out in the open. He trusts the guards and the alarms. ”

For Jorge Villacreses, general manager of Cuport Empresa de Seguridad, the lack of investment in specialized personnel has accommodated this type of incident. “The malls have considerably reduced their number of guards. Those that are not reached to guard large areas, whole blocks, in the parking lots or the floors. ”

This is compounded by the lack of customer culture. “Some people leave laptops, technological equipment, in full view of everyone. They know that the place is public, but they do not try to be cautious. ”

As a solution, the expert calls on the police and members of the National Directorate of Specialized Police for Children and Adolescents (this taking into account that, at least in the commercial centers of the north, minors enter sell your products) guard the area. “There are those who, not all, take advantage of the situation. There are those who carelessly steal things and go on the run. Ideally, there should be joint intervention. ”

“The problem is on the street”

n For the past year, San Marino has indicated to Dinapen the existence of minors who are engaged in asking for money inside the facilities. However, the problem has not been solved.

This was stated yesterday Vanessa Vejar, administrator, after the meeting he had with the prosecutor Miriam Neira, who investigates a case of alleged sexual abuse.

Vejar indicates that many of these children are manipulated by adults and that they have noticed the “unusual” way in which they react when the security personnel asks them to leave. “They make scandal, they scream and many times they are violent”.

It also mentions that clients have been victims of robberies by minors and that this is not a problem of the mall but of the city. (I)

The Senain handled 310 million in 7 years