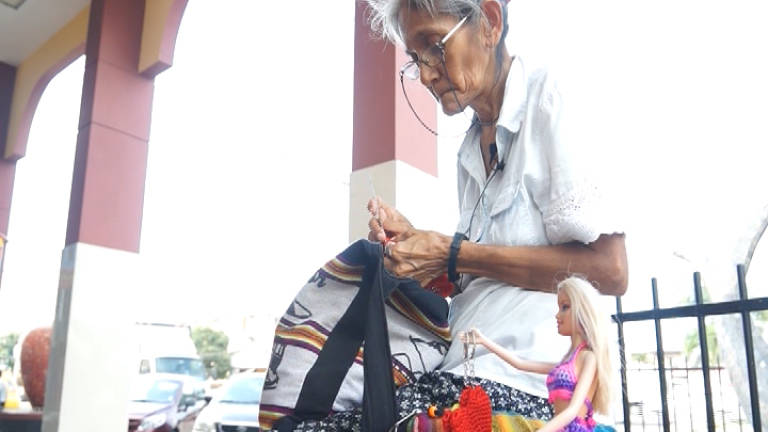 Sitting on a metal bench outside a supermarket, amid the noise of the busy day in La Alborada, Patricia Jara weaves, impassive. With his hands burned by the sun, moving a needle, is shaping a hat for a child. Next to her, she poses a Barbie doll with a costume also of her creation.

Thin, with gray hair and glasses, Patricia is known in the area. Those who circulate there know that when they ask about the weaver, they ask about it. Attentive and almost always with a smile, in that same bench designs daily blouses, shorts, bikinis, and all kinds of garments for humans and dolls. His talent has transcended even to social networks.

The street is the showcase to expose their designs. Her life motto is that “artisans and artists are free” and she says energetically that she does not fear the municipal ones. She says that on several occasions she has been thrown out of the city’s parks, and without fear she has confronted them, assuring them that she does not harm anyone, that, on the contrary, she promotes culture.

Originally from Riobamba, single and without children, Patricia defines herself as simple and humble. Always ready to tell her story, the ‘pilgrim’ – as many know her – tells that she lives in Guayaquil from a very young age, when her parents, a jeweler and a weaver, came to the city in search of better job opportunities.

It was just his mother who taught him the craft of weaving, when he was just 6 years old. Then he created with his own hands the clothes to dress his dolls; while his mother did, instead, clothes for her and her brothers.

Today, more than 50 years later, he remembers this stage with joy and speaks of one of his greatest dreams: contact Mattel, the creative company of the famous Barbie. In fact, he began to write a letter to the company, although now he is on break because his priority is to meet the orders of his customers.

The prices of their garments depend on the complexity of the process, ranging from $ 2 to $ 5. “I will continue with this long until God provides me with a better economic situation,” he says, while continuing to knit the red cap that will make a three-year-old happy. (I)