Insua has the Official Barcelona Line Up 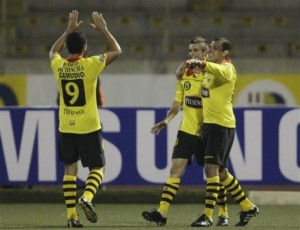 The Argentinean strategist, Ruben Dario Insua might already have the official line up for the Barcelona players for the match with Emelec on the Monumental Coliseum scheduled for tomorrow at 18:00.

Insua left out Cristian Sanchez Prette for technical reasons and his fellow countryman Ricardo Noir due to his injure. However Dennis Quiñonez will return along with Jose Luis Perlaza. The strategist would make a change on the front section due to the clash with the team of Universidad Catolica. Because of this, Juan Samudio will play instead of Juan Anangono.

Due to the latest work of the Barcelona players, the new line up would be: Maximo Banguera as a goalie, Omar De Jesus, Jose Luis Perlaza, Jefferson Hurtado and Giovanni Nazareno on the midfield. Dennis Quiñones, Fernando Hidalgo and Matias Oyala as wingers. The offensive line would be Luis Bolaños, Pablo Palacios and Juan Samudio.

Valencia Will Recover in England

The Classic Match Between Barcelona and Emelec Ended in a Tie