Intendancy withdraws from the Hometown Gym in Guayaquil, 50,000 N95 masks

In a joint operation, the Guayas Police Department and the National Agency for Sanitary Regulation, Control and Surveillance ( Arcsa ) removed 50,000 N95 masks and other sanitation supplies from a gym located in the north of Guayaquil , due to inconsistencies in permits and in your health records. 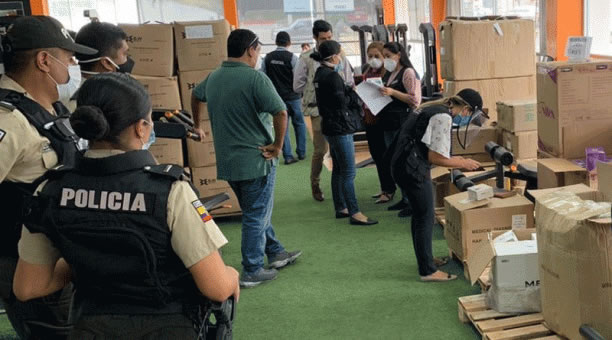 Intendancy withdraws from the Hometown Gym in Guayaquil, 50,000 N95 masks

The operation was carried out the morning of this Wednesday, June 3, 2020. The Governor of Guayas, Pedro Pablo Duart, reported on his Twitter account that he arranged to carry out the control operation that also produced the retention of more than 900 units of antibacterial gel. .

In a statement, the Guayas Government confirmed that 47,000 units of KN95 masks, 3,000 KN95 filter masks and 910 units of antibacterial gel were removed from the site .

The mayor of Guayas, Álvaro Nieto , said quoted by the Interior that the masks lack the required sanitary permits as confirmed by Arcsa.

In the case of gel units, it was found that they have a sanitary registry, but it is categorized as cosmetic , so its commercialization is not authorized within the premises operating permit , according to Arcsa resolution 067 .

Three commissioners and a contingent of 10 police officers entered the gymnasium facilities to carry out the investigations.

The operation of the Intendancy coincided with the multiple raids related to corruption cases that the Guayas Prosecutor’s Office carried out since this morning, in which former President Abdalá Bucaram and the prefect of Guayas, Carlos Luis Morales , have learned in Guayaquil . Both are related to alleged crimes of embezzlement and influence peddling in the contracting of medical supplies before and during the covid-19 health emergency .

Carolina Jaume comes out in defense of her husband’s gym

Guayaquil actress Carolina Jaume came to the defense of the gym of her husband, businessman Allan Zenck , from where the General Police Department of Guayas removed the masks and antibacterial gel.

Jaume posted a message on his Instagram account in the late afternoon. “After five hours of reviews, we have documented proof that HT always has everything in order. We continue selling at the lowest price in the country ”. The actress maintains that the control operation was carried out after false and unfounded chains, “malicious anonymous complaints”.

Jaume reported that the new business line of the gym located north of Guayaquil also includes rapid tests of covid-19. “We have once again documented that we have the necessary permits and records to be able to operate and sell (…) In a few days we started the operation of the first phase of our medical center,” said the actress.

Four factors led to the fall of Correos del Ecuador

More than 2,500 procedures can be done online in Ecuador