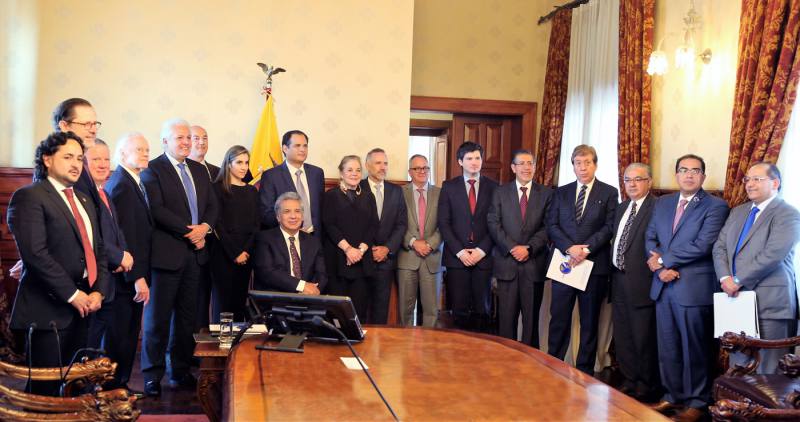 A “historic meeting” yesterday held the directors of the Inter-American Press Association (IAPA) and President Lenin Moreno, after fourteen years in which an Ecuadorian president had not received the representatives of this international organization.

The IAPA requested an audience with former President Rafael Correa, but it was never granted.

After the meeting, the president of the IAPA, Gustavo Mohme, showed enthusiasm for Moreno’s vision regarding freedoms, said that the project of reforms to the Organic Law of Communication  is a “great step”, “in the correct direction “and that the extinction of the Superintendence of Communication (Supercom) was necessary.

Mohme said that after talking with some organizations and assembly members, there is a series of “elements that subsist” in the current project, but he was confident that the debate will be perfected.

The head of the National Secretariat of Communication (Secom), Andrés Michelena, said yesterday that the “first proposal” of reform to the Organic Law of Communication has been sent and that the president is “democratic, respectful of the freedom of expression and also careful of rights”.

The IAPA also expressed its solidarity with the families of the three members of the El Comercio newspaper team who were kidnapped and killed by the irregular Front Oliver Sinisterra, led by alias Guacho, on the northern border.

Mohme said that the IAPA welcomes the efforts of the Ecuadorian and Colombian governments, hopes that soon the criminals will be submitted to justice and makes a “solidarity call to ask us to deliver the bodies of our murdered colleagues.”

At the beginning of the meeting, Moreno explained that the Law, instead of being an orientation, was punitive and therefore a reform was necessary.

In the morning, the directors of the IAPA met with the principals of the Ecuadorian Association of Newspaper Publishers (Aedep), Pedro Zambrano; of the National Union of Journalists (UNP), Guadalupe Fierro; of the Platform for Human Rights, Luis Verdezoto; and some legislators.

The IAPA invited President Moreno to the Assembly to be held in October and also to sign the Declaration of Chapultepec, on the rights to freedom of expression and press, in force 24 years ago. (I)

“From the perspective of the IAPA this is a historic moment for Ecuador, we are very enthusiastic about the vision that President Lenin Moreno has regarding liberties.” Gustavo Mohme, president of the IAPA.