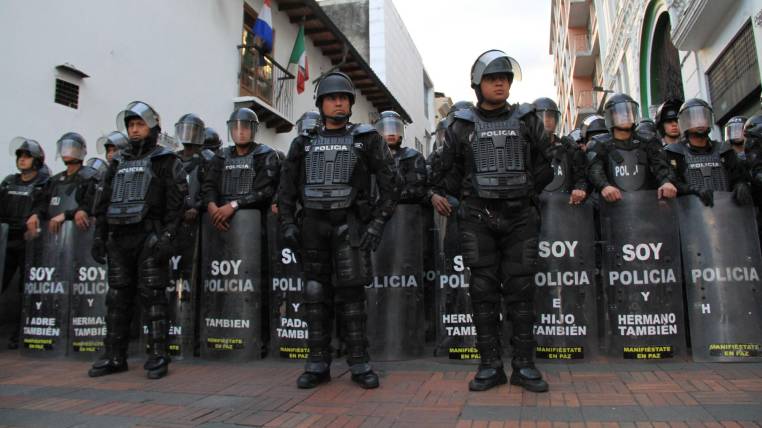 Four years and four months lasted the institutional emergency that the Ministry of Interior declared “to address citizen security and public order in the country.” Throughout that time –between January 2013 and May 2017– during which four ministers passed, the agency signed contracts that exceed 500 million dollars.

The declaration served for several negotiations, in which the normal procedures of public procurement were ignored, ranging from the purchase of helicopters, vehicles, weapons, horses, technological equipment and works of rehabilitation of buildings for the Police, to payments for settlement and maintenance of parks, implements for the coming of the Pope and the production and dissemination of an institutional piece of music.

More than a hundred suppliers were the successful bidders, according to a review that EXPRESO made to a database with a preliminary report of 293 contracts, delivered by the Ministry of the Interior, whose total amount includes $ 509,786,452.7.

The Ministry of the Interior has not disclosed the information on the hirings made during more than four years of institutional emergency.

According to the Organic Law of the National System of Public Procurement, “in all cases, once the emergency situation has been overcome, the highest authority of the contracting entity will publish in the Public Procurement Portal a report detailing the hirings made and the budget used. , with indication of the results obtained “.

Purchases for the Police are under criminal investigation. The Office of the Prosecutor follows the trail to a presumed network of ex-employees of the Ministry of the Interior who would have collected bribes for the award of contracts. One of those involved is María Paula Christiansen, former general administrative and financial coordinator, who held office during the administration of today’s Assemblyman José Serrano.

The Comptroller’s Office has a special examination report ready with observations found in 6 contracts and 14 payment agreements, totaling more than $ 243 million.

Until the end of this article, EXPRESO tried, without success, to obtain a pronouncement from Serrano about the news found in that audit.

Between January 4, 2013 and May 29, 2017, during the time the emergency situation lasted, four incumbents passed through the Ministry of the Interior.

José Serrano was in charge until November 15, 2016. Diego Fuentes took charge then and remained until January 4, 2017. He was succeeded by Pedro Solines, who remained in office until May 24, 2017. Finally, César Navas took the post, who declared the institutional emergency over. (I)

USD 92.7 million in damages to the State for two oil presales