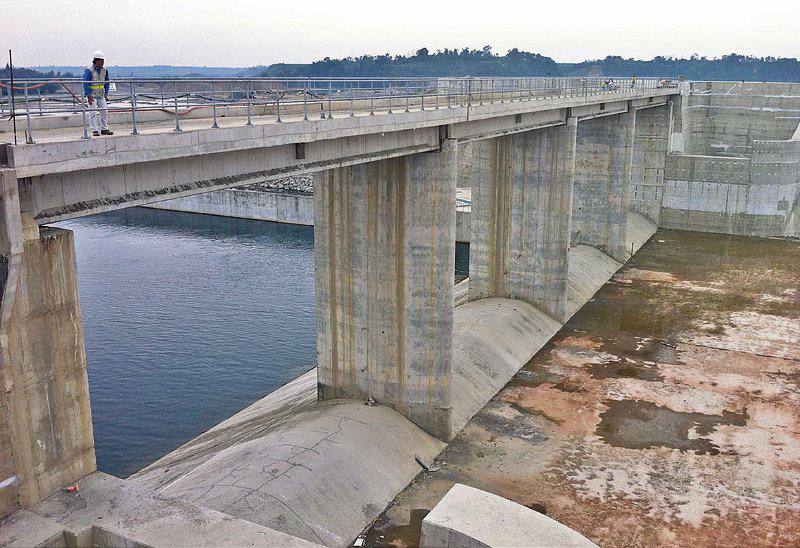 The legal testimony of accountant Roberto Trombeta gains strength. He revealed that the Brazilian construction company OAS designed a corruption scheme that includes Ecuador. An audit of the Internal Revenue Service not only confirmed the words of the informer, but also discovered that more money flowed from that structure than he had confessed.

At the center of the plot is the Madrid consultancy DSC Workshop. According to the Brazilian accountant, the Ecuadorian subsidiary of OAS simulated a contract with that company to divert $ 9.15 million obtained from the Baba Multipurpose Project, delivered to OAS after Odebrecht left the work. The construction company sent that money to Andorra and then directed it to the payment of bribes, confessed Trombeta.

A tax audit by the Internal Revenue Service confirmed that OAS transferred that amount to a DSC Workshop account in the private banking system of Andorra, in 2012. The dates of the payments coincide with the testimony of the informer.

Until today, only those disbursements were known, but the SRI audit discovered that the Ecuadorian subsidiary also sent money to DSC Workshop in 2013 and 2014. It is an additional $ 3.7 million. The destination was no longer Andorra, but an account in Bank Winter, Austria.

Not only did the destination change, but also the source of the funds, according to reports. For the transfers of 2013 and 2014, OAS used a Banco del Pacífico account, owned by the Ecuadorian State. While for 2012 payments he used a City Bank account in New York.

The Internal Revenue Service auditors set out to check whether DSC Workshop provided any service to OAS. For this, they demanded several documents from the construction company, such as contracts, consulting reports, invoices, payment vouchers, withholding attests and external audits. They also sent him a questionnaire with 14 questions to establish how much they knew the Spanish firm.

The OAS executives did not answer the questions or send all the papers.

It is known from the OAS response offices that he signed two contracts with DSC Workshop. The construction company said that the first one, from January 2011, was not in its files.

The second one, from February 2014, did send it to the Internal Revenue Service. There it is evident that the consultant would elaborate the “constructive method” for “phase 2 of the first line of the Quito Metro”.

By then, the tender for the second phase of the Metro was underway and OAS belonged to one of the four prequalified consortiums to win the contract. The final offers were submitted in July 2014 and the work was awarded to the consortium of Brazil’s Odebrecht and Spain’s Acciona.

The Internal Revenue Service consulted the Metropolitan Public Company Metro de Quito which link it had with OAS and DSC Workshop. The answer was that in 2014 he had no contractual, financial or accounting relationship with either of the two firms.

In the end, the auditors concluded that OAS did not show that it had received any service from the Spanish company. For that reason they established that the $ 12.85 million transferred to that company were not tax deductible and issued the respective glosses.

In total, the Internal Revenue Service raised objections to $ 41.54 million reported in the OAS financial balances between 2012 and 2014 (see table). As a result, the tax authority claims the payment of $ 7.67 million for income tax. Including interest, fines and surcharges, the debt amounts to $ 13.73 million. 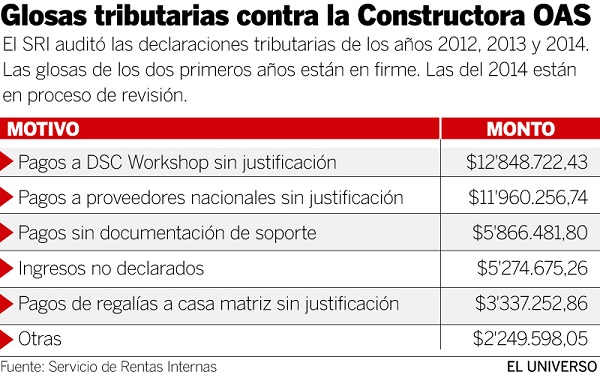 OAS can still challenge $ 196 thousand of these claims through the courts, said Zonal Directorate 9 of the Internal Revenue Service. You have a little less than two months to do it. The rest, $ 13.53 million, are already established as firm debt.

EL UNIVERSO requested an interview with the OAS representative in Ecuador, Francisco Cevallos Ayala, from the Cevallos & Noboa law firm, but he refused.

Also, this newspaper tried to contact without luck the executives of DSC Workshop. According to a report in the newspaper El País, of Spain, those responsible for that company have said they were “cheated and used.”

In that report, published in March, it was revealed that the money paid by OAS to DSC Workshop in 2012 ended up in an account, in Andorra, of the Kingsfield company, related to Odebrecht.

The Office of the Prosecutor opened an inquiry into Odebrecht in December 2016, which is known as the “mother investigation”. The Baba Multipurpose Project is part of that investigation, which is still reserved; while the beneficiary of the bribes Trombeta talked about is still unknown. (I)