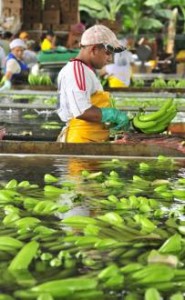 Long-term contracts with buyers from the United States and the European Union for the sale of bananas helped Ecuador in the first half of 2015 so exports of this product get a growth of 13.1% compared to the same period of 2014.

“With these markets agreements for one and two years were signed, therefore the price fixed in advance is respected,” said the president of the Association of Banana Exporters of Ecuador (AEBE), Eduardo Ledesma, explaining that these markets represent 40 % of the destinations of the fruit.

Ledesma said that this result was also achieved by a higher export volume, since in 2014 151.9 million boxes were exported, and in 2015 164 million boxes were sold. However, he explained that the price of the product has fallen, especially in countries like Russia, China, Japan and parts of the Middle East and North Africa.

Ecuador´s budget will reduce by $ 800 million