Mahmoud Ahmadinejad, President of Iran assured yesterday that if the United States attacks against the nuclear facilities of Teherán they will face a war without limits. The Iranian president made this statement during a conference with the American media.

The Iranian leader expressed that any military action from Israel with the support of Washington will be considered an act of war. “The United States has never known a serious war or a victory.” Added Ahmadinejad. 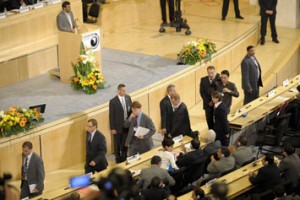 Meanwhile the UN established four sanctions against Iran due to the nuclear controversy and the pressure of the United States for the application of the norms. More over Iran denies his desire of acquiring nuclear weapons.

Ahmadinejad was questioned if he would consider an act of war that the US government authorize Iranian combat jets to fly over Iraq to bomb Iranian nuclear facilities, “First of all, do you believe someone would attack Iran? Personally I don´t think so, that regimen is too small on the map and its not considered a factor in our plan.” Affirmed the Iranian leader.

During the UN summit about the objectives for the millennium Ahmadinejad gave a speech that wasn’t translated by the UN interpreters.

Colombia: No. 2 Rebel Commander and Symbol of Terror Killed