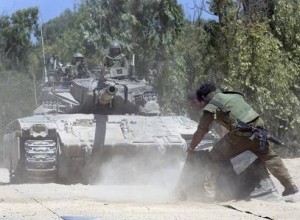 Israel today began to withdraw its tanks and armored cavalry of the army deployed along the Gaza border after the day that the permanent ceasefire was signed with Palestinian militias.

Logistics units have begun moving the tanks and other engineering military equipment to the bases of other parts of the country, which had been deployed for ground operation, local media reported.

However, combat divisions, particularly in Gaza, have not yet fallen the alert level, which remains high, said the online edition of the newspaper “Yediot Aharonot”, the highest circulation daily in the country.

Palestinians and Israelis agreed on Tuesday afternoon a permanent ceasefire after 50 days of conflict that has killed more than 2,100 Palestinians, mostly civilians, and a quarter of them children.