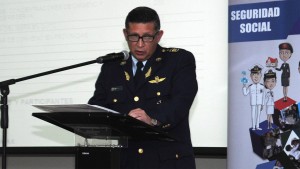 The Institute of Social Security of the Armed Forces (ISSFA) reports “red numbers” in the profits of at least three of the thirteen companies in which the body has a stake.

“We have no great businessmen, what we wanted is to maintain investments in the companies and have actuarially the possibility of being sustainable,” said Juan Francisco Vivero, brigadier of the Ecuadorian Air Force and director of the ISSFA, last Wednesday during an event of accountability attended by Army commander Luis Castro.