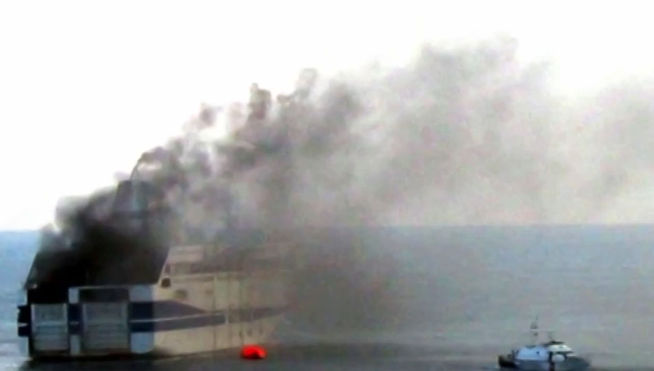 Hundreds of people remained blocked on Sunday afternoon in difficult weather conditions, aboard an Italian ferry that caught fire off the Greek coast due to a fire that was traveling from Greek port of Patras to Ancona, in Italy, reported authorities of the country.

Rescuers were trying on Sunday, despite strong winds, evacuate the 478 passengers and crew members.

Among the passengers are 268 Greeks, according to the Ministry of the Sea, and the crew consists of 22 Italian and 34 Greeks.

Rescue operations were performed in “especially difficult and complicated” conditions, with winds of force 10 on the Beaufort scale, which has 12 levels.

The “Norman Atlantic,” an Italian flag ferry chartered by the Greek company Anek for the Patras-Ancona bond, had left the port of Peloponnese on Saturday around 15H30 GMT.

Last minute, a spokesman for the Greek Ministry of Merchant Marine and Sea, said a man died without specifying the name or nationality of the victim and has been transported to Brindisi, Italy.