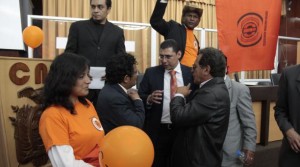 Militants of the Izquierda Democrática (ID) party held on January 24, their first Assembly, with which they will begin the process of reinscription of the party after being removed from the electoral register in 2013.

At the meeting the principles and values of the party, statutes, etc. were approved, which may apply to the National Electoral Council (CNE) keys. Then they will have to start collecting signatures.

Andrés Vallejo, former Minister of Government in the Presidency of Rodrigo Borja, led the consolidation of this match.