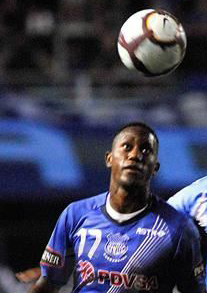 The Ecuadorian striker of the team Club Sport Emelec, Jaime Ayovi, scored a total of 23 goals during the Ecuadorian tournament of 2010. Ayovi’s performance allocated him on the 25 position of the League of Leading Scorers in the World of the present year.

The International Federation of Football History and Statistics (IFFSH) published the ranking. Meanwhile, the Liga Deportiva Universitaria de Quito player, Hernan Barcos, is also on the list in the 28 position. From the team Manta FC, Julio Maximiliano Bevacqua, is ranked 34 on the list.

The leading scorer of the board is the Uruguayan, Luis Alberto Suarez, from the Ajax of Amsterdam, closely followed by Lionel Messi of the F.C. Barcelona.