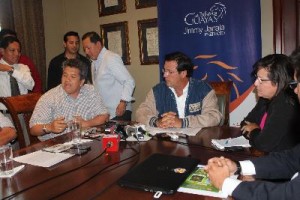 The Prefect of Guayas, Jimmy Jairala, said that Guayas wants attacks to be over against officials of the Prefecture who work in the Abdon Calderon area and if they do not, the preliminary agreement to set the boundaries between Azuay and Guayas will be broken.

This, after last week pro-Azuay people assaulted 15 people from the Prefecture of Guayas, the Municipality of Balao and pro-Guayas inhabitants during the inspection performed by the Viceprefect Monica Becerra and Mayor Luis Castro at the beginning of the paving works for the enclosure streets, which is on border dispute between the two provinces.

“The versions that have circulated on social networks do not correspond to the reality of the facts. It is an absolutely distorted information and I think that the Prefect of Azuay (Paul Carrasco) has been misinformed about what really happened that day,” he said.

“There is no, and there was no legal impediment for the entrance of the machinery of the Prefecture of Guayas and the Municipality of Balao. Consequently, we were not violating any agreement, not in the slightest the Letter of Intent we subscribe, given the conversation process of the technic comittees was already finished,” said Jairala.

Jairala said they are willing to talk but “if conditions do not change and if they insist on hindering the work of the Prefecture of Guayas and the Municipality of Balao, we will opt for institutional resolution and not by the popular consultation.”

A corporate resolution would imply that the President of the Republic, Rafael Correa, decides who owns the territories.