The region is one of the main world suppliers of minerals, oil and agricultural products for the Asian country. This year marks the centenary of the beginning of diplomatic relations between Ecuador and Japan, which coincides with the arrival of the bacteriologist Hideyo Noguchi to Guayaquil in 1918.

In August 2014, Japan’s Prime Minister, Shinzo Abe, concluded his tour of Latin America and the Caribbean (ALyC) in São Paulo, the city that hosts the largest community of Japanese descent the region. In his speech marked by a motivational tone, Abe publicly demanded that his ministers of various branches visit Brazil and other countries of Latin America and the Caribbean, a territory that is one of its main suppliers of natural resources, especially minerals.

Masahisa Sato, Vice Minister of Foreign Affairs of Japan (MAEJ) visited Quito last month to commemorate 100 years of diplomatic relations between Ecuador and his country, a date that activated a committee of 200 people to prepare different activities for the bilateral celebration that also recalls the arrival in 1918 of the Japanese bacteriologist Hideyo Noguchi in Guayaquil, where he began his research to eradicate yellow fever.

Masayasu Yoshida identified three characteristics that make Japan’s investment in LAC attractive: besides being one of the largest providers of natural resources, there is its population growth (it has more than 600 million inhabitants) and economic growth (its Gross Domestic Product -PIB- it was 5.3 trillion dollars in 2016 -according to the World Bank-, twice the GDP of the Association of Southeast Asian Nations -ASEAN-; there are coincidences regarding principles related to democracy and the market economy, and there is greater representation in international organizations (33 countries in Latin America and the Caribbean make up approximately 18% of the UN, while Brazil, Argentina and Mexico they are members of the G-20); and in this region is the largest Nikkei network in the world and it is also the site where the number of Japanese companies has increased the most.

The current desire of Japan to approach ALyC quickly has historical and geopolitical nuances. Since the second half of the 20th century, the Japanese economy developed at fast paces, but its growth stagnated more than two decades ago.

Since Donald Trump assumed the presidency of the United States in January 2017, his foreign policy has been characterized by isolation: his discourse has been more nationalistic, he has gone out of commercial agreements and even managed to take economic resources from Unesco. Trump’s lack of international commitment has been taken advantage of by China, a country led by Xi Jinping, who is behind the project of the Strip and the Route, formerly known as the Silk Road, a kind of millenary network of trade routes that stretched from the Asian continent to the markets of Africa and Europe.

China’s greatest ambition for commercial growth in the mega continent of Eurasia has sparked fears in Japan, the second largest economy in Asia, and has caused Sino-Japanese relations to become even more tense. With adjustments, the economy grew at an annualized rate of 0.5% between October and December, however, in order to maintain or grow this level, domestic demand-private consumption and corporate spending-must increase more according to a published note. the previous week in The Japan Times, a diary that gathered the statements of Yuichiro Nagai, an economist at Barclays Securities Japan Ltd. who said: “private consumption has been recovering thanks to the moderate growth of wages, but it’s not solid enough to absorb the impacts when something bad happens. ”

Although Japan is the country with the highest public debt in the world (it represents more than 200% of GDP), its levels of private savings exceed this indicator and the largest amount of debt is internal.

Abe is the one who now leads this treaty that, before Trump defected, would encompass a large part of the global GDP and compete with Chinese trade. The figures are now less encouraging. Manufacturing being the most important item in the Japanese economy, the demand for raw materials has been vital for this support.

“What we are interested in is investing with quality and not quantity,” said Akio Hosono, principal advisor of the Japan International Cooperation Agency (JICA), when asked about Japan’s apparent lack of interest in sectors covered by China in Latin America.

“The long-term commitment of Japanese commercial companies (Sogo shosha) is another of our unique characteristics. They act as investment banks and participate directly in the management of the companies that invest. ”

In Argentina, a larger increase in sales is expected, while in Mexico they identified a “certain caution regarding the expansion of activities, due to the opacity of the NAFTA renegotiations,” said Kojiro Takeshita, director of Latin America and the Caribbean in the research department abroad of Jetro. 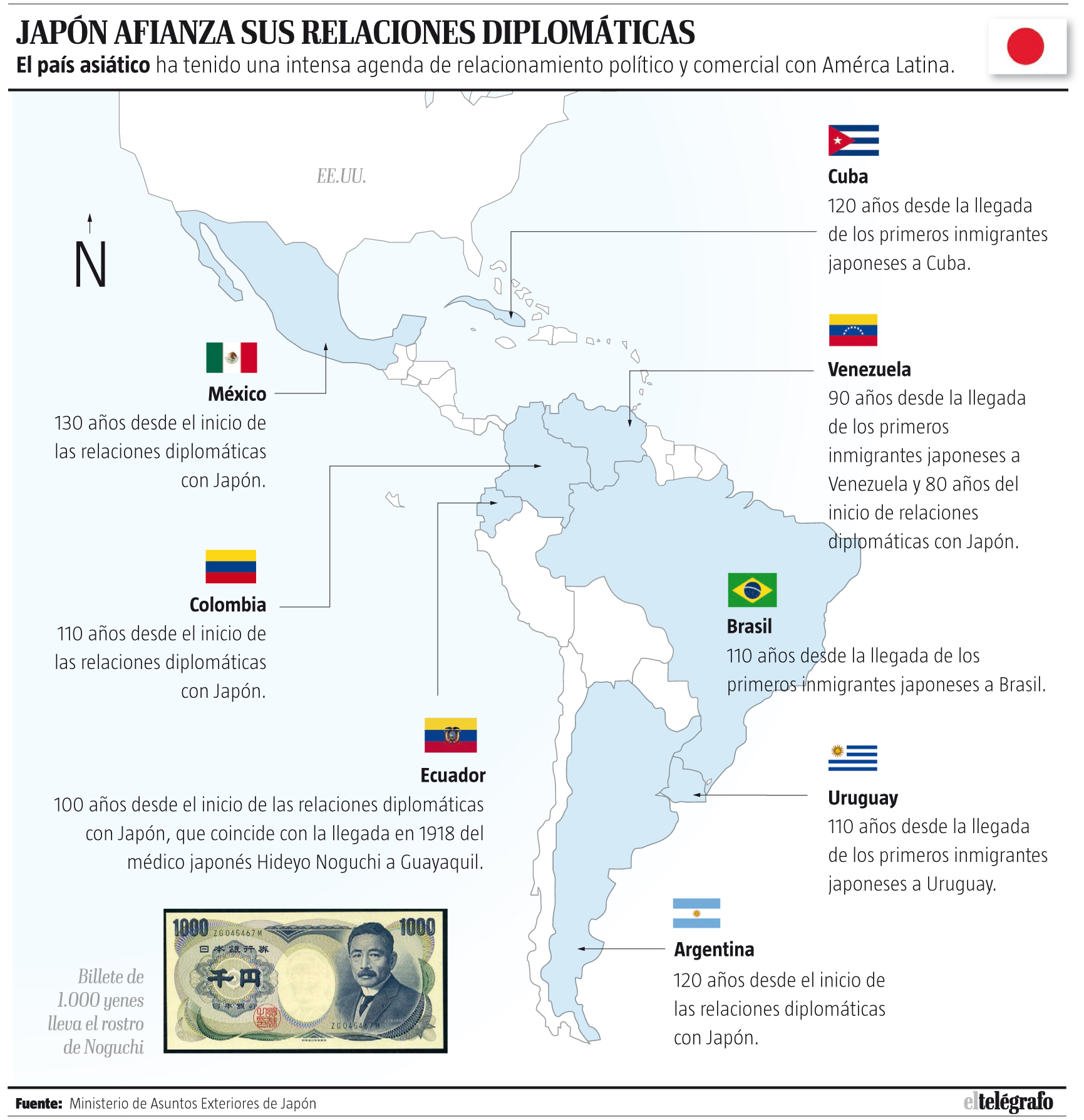 For the first centenary of bilateral relations between Japan and our country, Correos del Ecuador is advancing in the process of editing a commemorative Postal Seal of that date, which is coordinated by the Foreign Ministry.

33 countries in Latin America and the Caribbean make up approximately 18% of the UN.

The Embassy of Japan in Quito is coordinating the realization of a special television program dedicated to Ecuador, which would be broadcast in Japan, through public television NHK. (I)

Guayaquil, attractive for the ‘euro-asian’ route