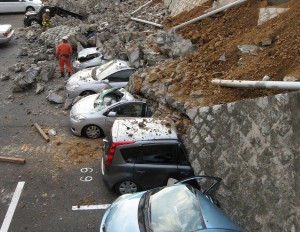 Early morning Japan mobilized a nationwide rescue affected by the quake and provides some food and waters to thousands in zones under siege without water, electricity, and telephone service.

About 1,300 to 1,700, is the number of victim that fluctuates so far. Rescuers were still trying to reach the most affected areas and virtually impossible to access. More than 300,000 people have been evacuated, while 90,000 fled the area surrounding the nuclear plant in Fukushima. Town after town reported that parts of their population were unaccounted for. Survivors gathered on rooftops, frantically shouting or signaling for help.

More than 125 aftershocks continued scaring this nation and its people, while the Geological Survey of the United States record about 90 earthquakes in the east coast, on Saturday alone, five of them with magnitudes larger than 6.0.

Japanese authorities have told the United Nations (UN) that they are preparing to hand out iodine to residents in the area. The use of Iodine can help prevent radiation victims from developing thyroid cancer. This time, Japan has accepted foreign aid, both United States and other nations.