Jiménez defense requests annulment of judgment based on current COIP 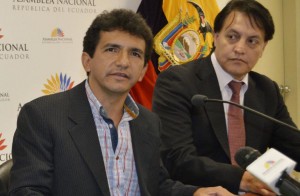 The defense of former Assemblyman Cléver Jiménez, Fernando Villavicencio and his advisor Dr. Carlos Figueroa, yesterday delivered a request for the annulment of judgment and the ratification of the precautionary measures issued by the Inter-American Commission on Human Rights (IACHR).

The lawyer Julio Sarango, member of Jimenez’s defense and his colleagues, filed the petition before Judge Lucy Blasio, relying on the current Integral Criminal Code (COIP), which according to him, canceles the cause for which they were processed.

“In the previous penal type it was spoken of those who have submitted complaints or indictment that has not been proven in court. Now, Article 271 speaks of the complaint that has not been tested during the process, “said Sarango, who believes that the change of that word invalidates the past proceeding.

Jiménez, Villavicencio and Figueroa were convicted for insulting the president Rafael Correa.