Former Vice President Jorge Glas Espinel left Prison 4 in Quito surrounded by a group of supporters . He obtained his freedom from him after benefiting from a precautionary measure issued by Judge Emerson Curipallo , from Santo Domingo de los Tsáchilas. 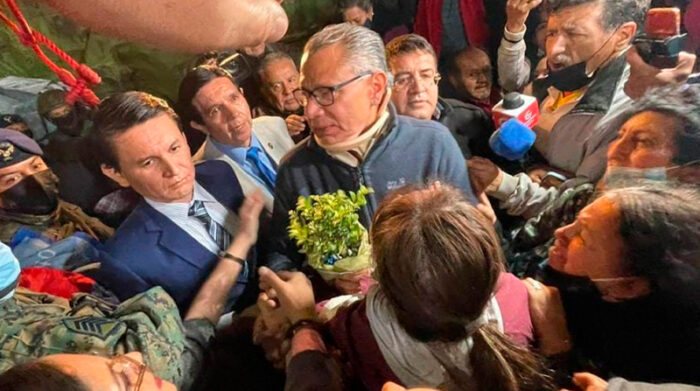 Jorge Glas has two executed sentences for corruption plots. He has a conviction for conspiracy and another for bribery.

The exalted correísmo official was released from jail, but he still has to pay more than USD 7.8 million as comprehensive reparation to the Ecuadorian State. That amount was established when he was sentenced for acts of corruption.

Glas has two convictions against him. The first is six years for the crime of illicit association, in the Odebrecht case. And the second is eight years for bribery, in the Bribery case. Both sentences are enforceable, that is to say that three different judicial instances ratified the sentences.

In 2017, the sentence for illicit association was handed down against Glas and seven other people. In that year, a Court established that the reparation amount is USD 33.3 million. Of that value, the former vice president must pay USD 7,050,000.

USD 778,224 is added to this value as compensation for the crime of bribery, in the Bribery case.

The Attorney General ‘s Office confirmed that, to date, Glas has not paid those reparation amounts directly. However, that entity is currently processing the seizure of their assets.

For example, on April 12, national judges ordered the seizure of the assets of the former vice president and other sentenced persons in the Bribery case . The authorities determined that Glas shares ownership of an apartment and a parking lot in a residential complex in the north of Quito with his wife.

In the Odebrecht case , the Attorney General ‘s Office also ratified its request to a National Court to order the seizure of an apartment , a warehouse and a parking lot in Tonsupa , Esmeraldas . Glas and his wife have the right to those properties with usufruct for life .

According to the Attorney General ‘s Office , the seizure of these assets will allow “partial coverage of the amount set in the judgment as comprehensive reparation in favor of the Ecuadorian State for this case of corruption .”

The current government expressed its rejection of Judge Curipallo ‘s decision to grant Glas a release ticket . “This would be the fifth time in which a judge acting in constitutional matters sends a notification with a similar content regarding the freedom of the aforementioned citizen,” said the Ministry of Government, in a statement.

That State portfolio refers, for example, that, in April and August of this year, a judge from Manglaralto and another from Portoviejo granted habeas corpus in favor of the former correista official and issued release tickets. However, those decisions were reversed by provincial judges.

“We cannot fail to mention that the current legal system, which we are obliged to respect and abide by, is the one that has been inherited from the last 15 years, and that has been subject to abuse and discretion,” said the Ministry of the Government. .

That entity added that “the pertinent institutions will exercise the rights of those who consider themselves assisted, within the unrestricted framework of respect for the Constitution and the Law .” The objective will be to annul the court ruling that benefited the former official. Precisely, the National Comprehensive Care Service for Prisoners of Liberty (SNAI) said that it will coordinate with the Attorney General ‘s Office to present a revocation of the precautionary measure granted on Monday by magistrate Curipallo.

A lawyer in free practice was the one who requested the precautionary measure in favor of the former vice president. In that request, the lawyer would have argued that the SNAI “did not issue administrative acts in a timely manner” in relation to a request for Glas to obtain the benefit of the unification of sentences and pre -release. Judge Curipallo ‘s resolution states that this action would have violated his rights to legal certainty, due process and to enjoy goods and servicesquality. Instead, the SNAI said that “there is no threat or violation of the rights of the sentenced person.”

The release of the former strongman of the Strategic Sectors of the government of Rafael Correa has certain conditions. In the first place, Judge Curipallo clarified that the freedom granted is ” provisional ” until a judge of prison guarantees provides otherwise. In addition, the judge ordered that Glas is prohibited from leaving Ecuador and must also appear once a week at the Litoral Penitentiary, in Guayaquil. Precisely after leaving Jail 4, he got into a vehicle with the aim of traveling to the Main Port.