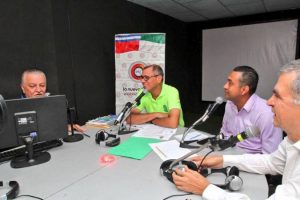 Jorge Glas, the candidate for the Vice-Presidency representing the Alianza PAIS party, spoke yesterday of the dirty campaign that, according to him, has been carried out against him. In his opinion, this arises from opposition candidates, who “lack  viable proposals” and have attacked him without any evidence out of “bad faith.”

In Portoviejo, Glas emphasized that the world should start debating sanctions for “lying on social networks.” “That is an issued to be discussed after the elections, but I raise it, I have a degree in Information Technology and Communication, and I believe that Ecuador can propose advanced regulations in something that will be titanic, quixotic because our opponents will try to link it with freedom of expression. We only want that there is no anonymity in social networks,” the candidate stated.

Glas insisted on challenging Guillermo Lasso to respond to concerns he raised last week as his alleged relationship with offshore companies abroad and advanced that after the elections he will promote a Truth Commission that informs how some people got banks and how these banks bought media.