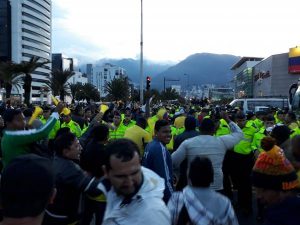 Clashes occurred outside the Atahualpa Olympic Stadium between the Guillermo Lasso´s supporters and the government´s supporters.

In the final minutes of the Ecuador vs. Colombia (0-2) match played at the Atahualpa Olympic Stadium, on the occasion of the qualifying rounds to the World Cup Russia 2018, incidents occurred between supporters of the CREO-SUMA Party and those opposed to the candidacy of Guillermo Lasso.

Presidential hopeful Guillermo Lasso, who attended the game, had to leave with police guard because a group of people opposed to his candidacy launched at him objects at the exit of the stadium. The incidents began when a group of supporters of the presidential candidate encouraged him, while hundreds of vuvuzelas sounded in the hands of government supporters.

With hid departure, the situation did not calm down, and hundreds of supporters of the government go out of the stadium to keep shouting their slogans, even attacking people who passed by, forcing on occasions the intervention of police officers.