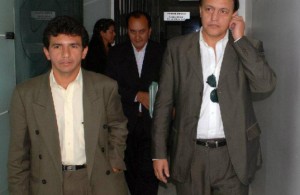 Judge Lucy Blacio denied the request for termination of the penalty to former assemblyman Cléver Jiménez and his advisor Fernando Villavicencio and reduced their sentence from 18 to 12 months. This, after being convicted of libel against President Rafael Correa.

In the new Integral Criminal Code (COIP), which became effective on August 10, it is established a penalty of six months to a year for the offense of malicious prosecution and claims, instead of three months to three years as in the past .

Protected by Article 16 of the COIP, which refers to the mercy in sentencing, Blacio decided to reduce the incarceration time.

For Political activist Carlos Figueroa it was denied the request for release and the sentence of six months was confirmed for him, which adjusts to the new rules.

Julio Sarango, attorney of the three condemned, rejected the court decision and noted that, in her judgment, the offense disappeared with the new COIP and should be declared extinct.

Poroshenko: Russian military forces are invading the province of Donetsk