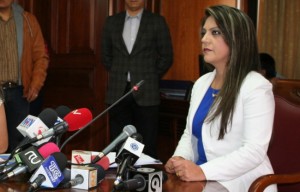 Wendy Molina, Vice President of the Constitutional Court, was appointed judge rapporteur on the draft constitutional amendments submitted by the Alianza País block. Molina will have to prepare the draft opinion to the Assembly Plenary for the Court to define whether the project will be addressed via amendment or referendum.

The judge has 10 days to gather information and other 15 to call on other entities in order to feed the debate. Then, proponents (Alianza País) shall be called to a hearing, and later other judges of the Court to contribute to the process.

The total time to comply with the due process is 65 days, but the judge Molina said that because of being a “special case” the time will be halved. Thus, on September there would be a court ruling.